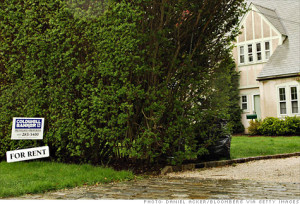 FORTUNE —
Modern America has long paired the “American Dream” with home ownership. The idea of staying put, paying property taxes and periodically mowing the lawn belonged to citizens who were somehow more American than the poor saps who could only afford to rent the place they called home.

The notion isn’t accidental. Ownership and the American Dream are deeply linked in government policies that favor mortgages over rent payments, dating back before Herbert Hoover was elected president in 1929. As secretary of commerce, amid the Red Scare, Hoover trumpeted homeownership, believing that if one had an equity stake in the country, they’d less likely fall under the spell of Communism. What followed during the Great Depression were a spate of federal measures to help troubled homeowners, at a time when half of all mortgages were in default.

In today’s weak housing market, ownership has ceased to be an investment vehicle that millions used to trade up into the houses of their dreams in the boom years. And it’s not an ATM machine for constant refinancing, either. Instead, for the past four years, ownership has been a culprit of distress. In June, one in every 411 housing units received a foreclosure filing, according to RealtyTrac Inc. Between 2006 and 2009, home prices fell more than 32%, according to the S&P/Case-Shiller Home Price Index.

Renting on the rise

All that has made Capitol Hill rethink its definition of the American Dream. As recently as the Clinton and George W. Bush administrations, the mantra of homeownership was almost synonymous to civic duty, but top policymakers now say that homeownership isn’t necessarily good for everyone.

In May, U.S. Housing and Urban Development Secretary Shaun Donovan testified before a House committee that the financial crisis proved the need for a better balance between ownership and rental housing. And HUD senior official Raphael Bostic last week told the Washington Post: “In previous eras, we haven’t seen people question whether homeownership was the right decision. It was just assumed that’s where you want to go,” Bostic said. “You’re not going to hear us say that.”

Owning a home wasn’t always as easy as the liar loans of 2000′s made it. When the economy went bust during the Great Depression, legislation intended to stimulate plummeting housing starts and defaulting mortgages laid the foundation for a bigger role of government over the housing market. Hoover signed the Federal Home Loan Act, and in 1933, Franklin D. Roosevelt created the Home Owners’ Loan Corporation to provide low interest loans.

And the government was just getting started: a flurry of legislation was passed over the ensuing decades, helping veterans, minorities and the populace as a whole secure mortgages. But it appears the pendulum has swung.

Gyourko says that he’s not entirely against the idea of homeownership. After all, as a father of two, the 53-year-old professor owns a home. But he stresses that ownership should be looked at more broadly — beyond any kind of long-term investment or cost benefit over renting.

Owners don’t pay the landlord, but they pay taxes and maintenance costs on their house, and Gyourko says those costs can end up being roughly the same.

As far as buying a house as a smart long-term investment, Gyourko says that’s not always true. He says between 1975 and 2008, the price for houses of similar quality and size appreciated an average of about 1% per year after inflation. Investors could have earned more by buying Treasury bills.

The post-crisis role the federal government decides to play in the housing market remains to be seen. In response to plunging home prices and record foreclosures rates, the Obama administration is pursuing an overhaul of policies that could put much less focus on homeownership. The administration could also scale down government support of home loans and put more focus on affordable rentals, but it isn’t clear what direction officials will take.

The issues with Fannie Mae (FNM, Fortune 500) and Freddie Mac (FRE, Fortune 500), the mortgage-finance giants seized by the government in September 2008 amid huge problems with bad loans, remain a touchy topic with lawmakers.Their combined bailout, according to some estimates, could reach $1 trillion — a figure some might pin as the ultimate cost of generations of policies geared to favor home ownership.

Many blame the agencies’ loose lending practices for contributing to the financial crisis. Republicans wanted the mortgage giants’ fates to be addressed in the recently approved Dodd-Frank bill overhauling the nation’s financial regulations, but that didn’t happen.

However lawmakers define the government’s role in the housing market, consumers have already begun redefining the American Dream: One where it has become socially OK to mail in a rent check rather than a mortgage coupon.

Real estate investors, wholesalers, flippers, real estate agents, and everyone connected to the real estate industry will benefit from the wealth of information we share very month.

Sign up for our newsletter, and you'll receive our newest articles!

By clicking this button, you consent to receive emails, calls, and text messages about our products and services at the email address and phone number you provided. You agree that such calls may be made using an automatic telephone dialing system, they may be considered telemarketing or advertising under applicable law, and that you are not required to provide your consent to these calls to make a purchase from us. For more information about how we process your data, please click here to read our Privacy Policy.

Get started investing in real estate with Graystone Investment Group.